There were so many decks on the ship however deck number 14 was where the pools, buffet restaurant, burger and pizza bar, ice cream parlour, spa, giant movie screen and bar were. There were two pools, an outside one and one that was under cover. There were also so many tables and chairs as well as deck chairs everywhere. And of course the deck went to my favourite place, the back of the ship. There was a bar, lovely tables and chairs, a small pool and different area accessible by stairs.

Deck 15 was obviously one deck up. That had a bar and plenty of deck chairs everywhere, as well as smaller sheltered decks that were only accessible by stairs. It was also possible to zoom around the sides of the ship as well as go to the front.

ACCESSIBILITY IN A WHEELCHAIR - I had no problem zooming around on deck 14. I'd just come out from the corridor through the automatic doors, and be on the deck. Deck 15 was a little tricky as there were two doors I could go in and out of. One was an automatic door, the other someone had to open for me. I always went through the automatic doors, however the ramp was very badly designed as the gradients were shocking. I always needed to ask someone to push my chair while I was driving it on top speed, just to get over it. It freaked me out a little as earlier on I did it on my own without my seat belt, and nearly fell out my chair. so after that experience, I wore my seatbelt around the ship all the time. Back to deck 15. It was great because I had access to go along the sides of the ship to the front, and almost to the back. There were stairs at the back that able bodied people could walk up. That didn't worry me as I still had so much freedom.
THE POOLS AND UPPER DECKS OUTSIDE, INCLUDING THE HUGE OUTDOOR MOVIE SCREEN.

ABOVE AND BELOW - THE INDOOR POOL. THERE WAS A DECK ABOVE HOWEVER I HAD TROUBLE ACCESSING THAT AS IT HAD A STEEP SMALL RAMP, AND STIFF DOORS THAT HAD TO BE OPENED. THERE WAS NO NEED FOR ME TO GO UP THERE. 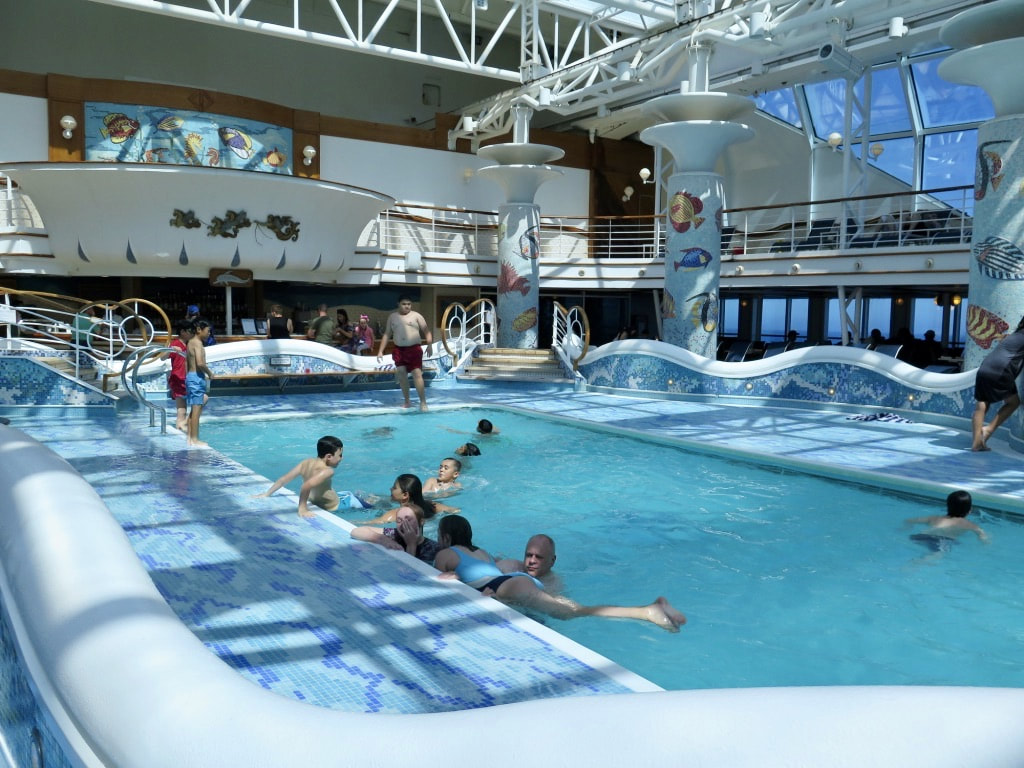 ABOVE AND BELOW - THE OUTDOOR POOL AREA WITH THE HUGE MOVIE SCREEN. 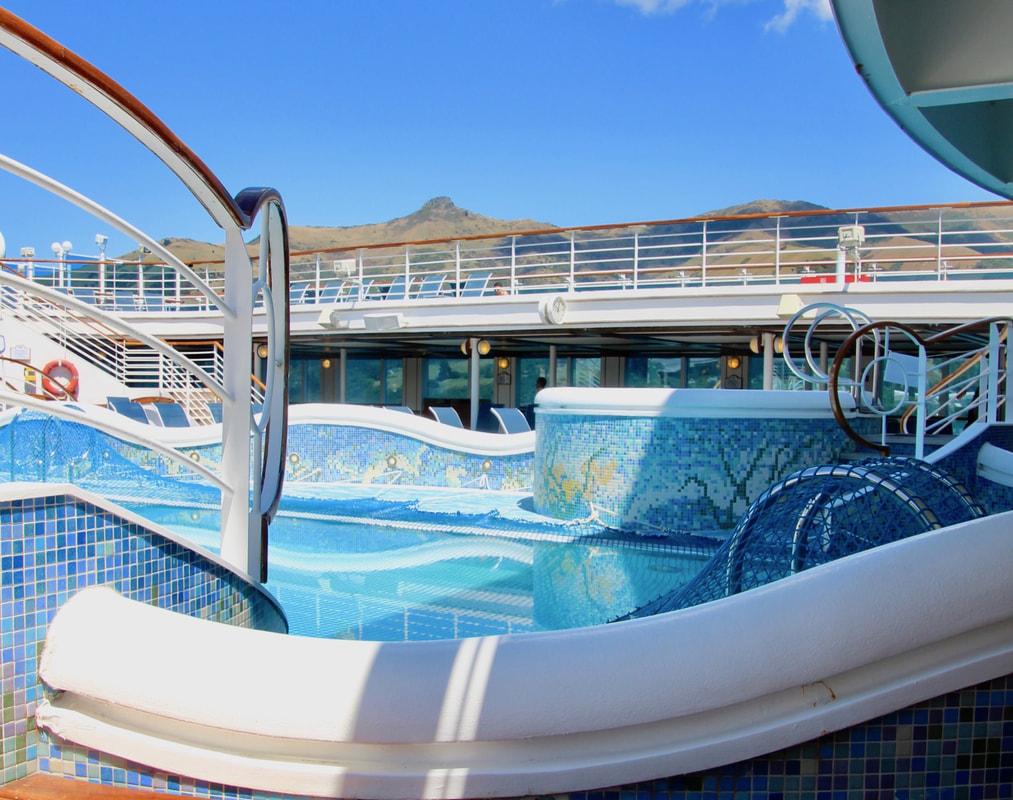 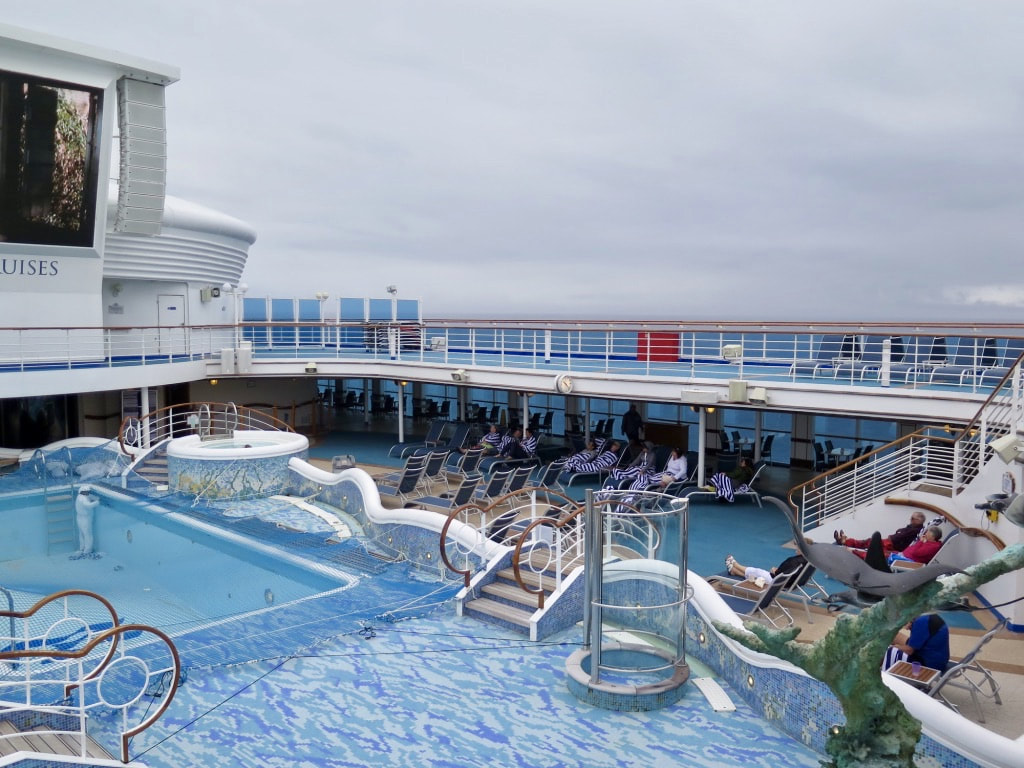 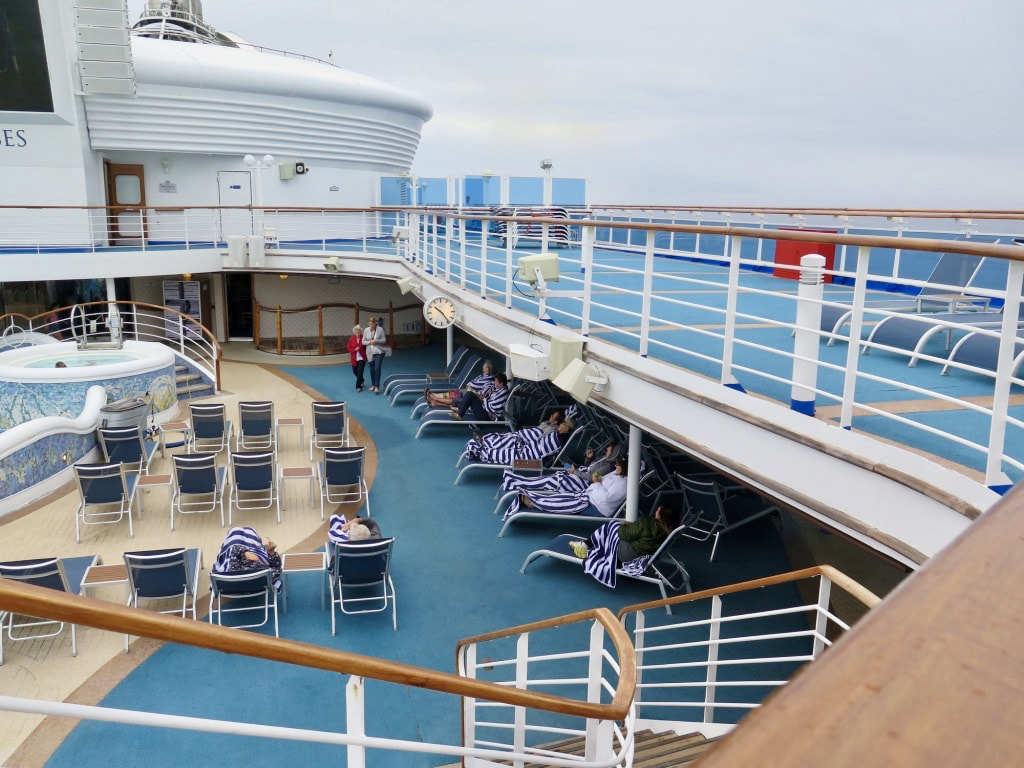 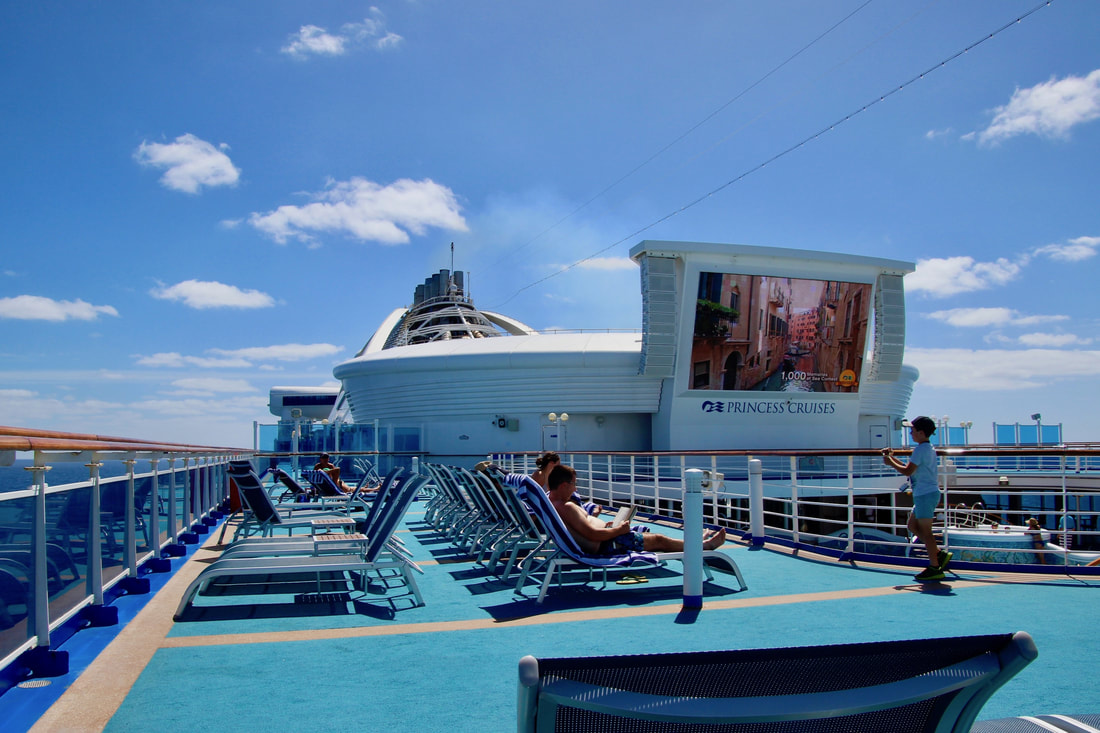 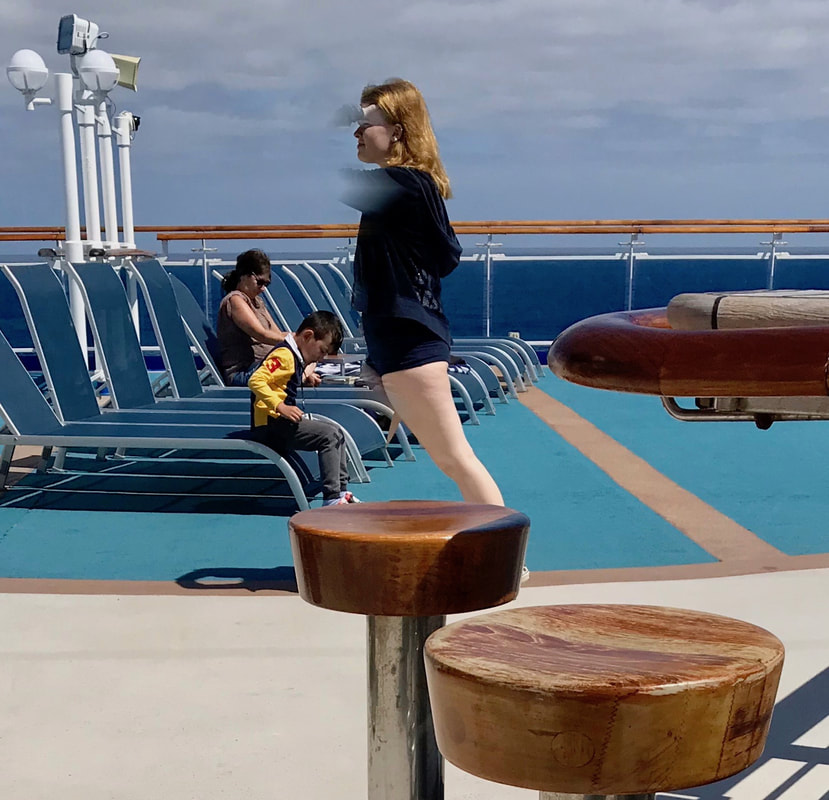 ABOVE - I LOVE THIS PHOTO AS ONE OF THOSE WEIRD SHOTS. I DIDN'T REALISE IT UNTIL I WAS EDITING THEM. CAN YOU SEE WHY?

ABOVE - A PANORAMIC IPHONE PHOTO OF THE OCEAN AND A BEAUTIFUL SUNNY DAY.
ABOVE - THE SIDES OF THE SHIP HAVE WIND BREAKS (THE BLUE DIVIDER IN THE TOP LEFT SHOT). THEY DON'T REALLY HELP ON A WINDY DAY BUT THEY LOOK GOOD. IT WAS EASY FOR ME TO WIZZ AROUND THESE AREAS. 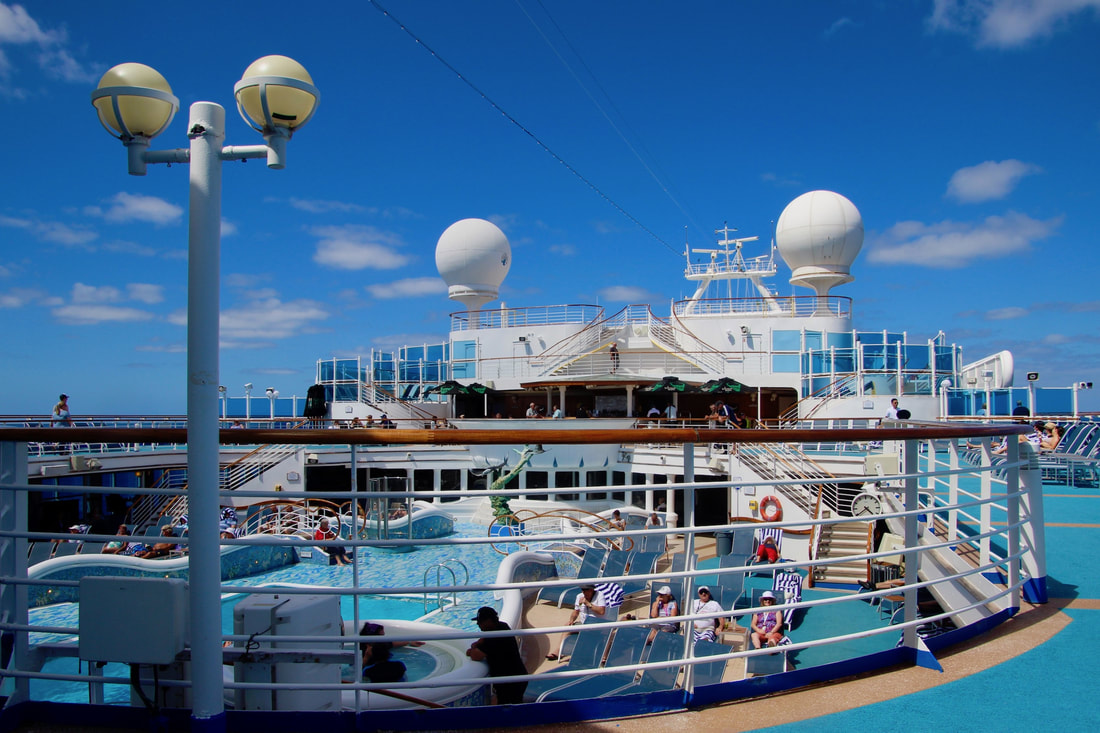 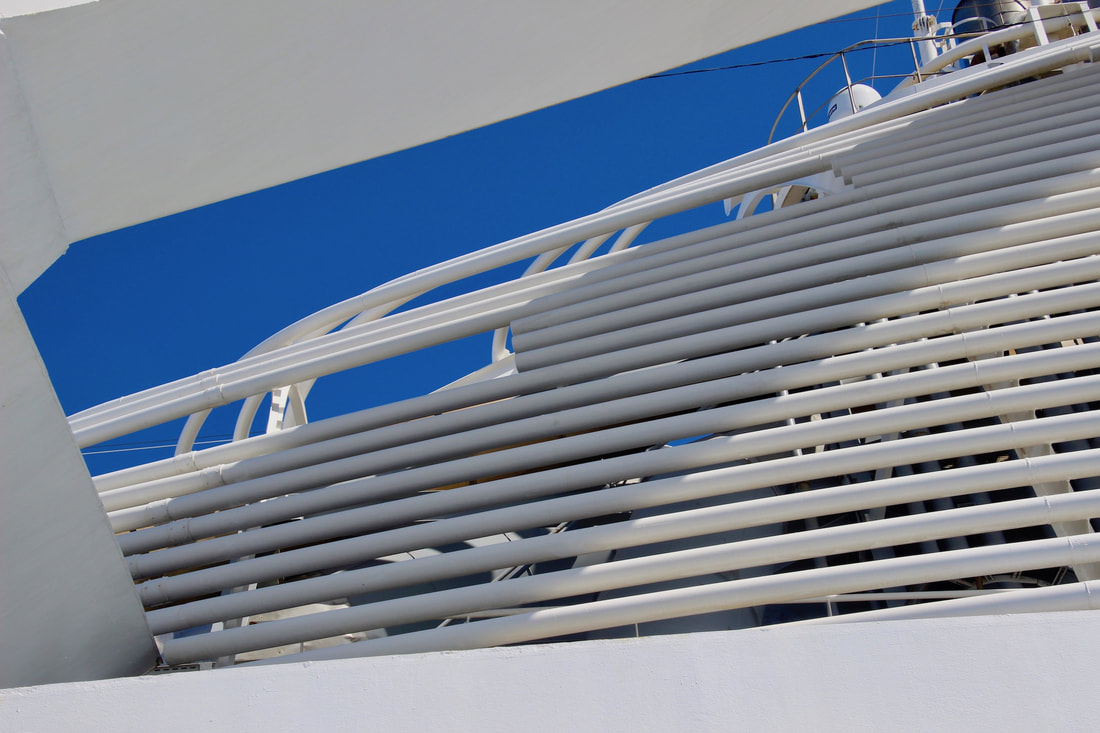 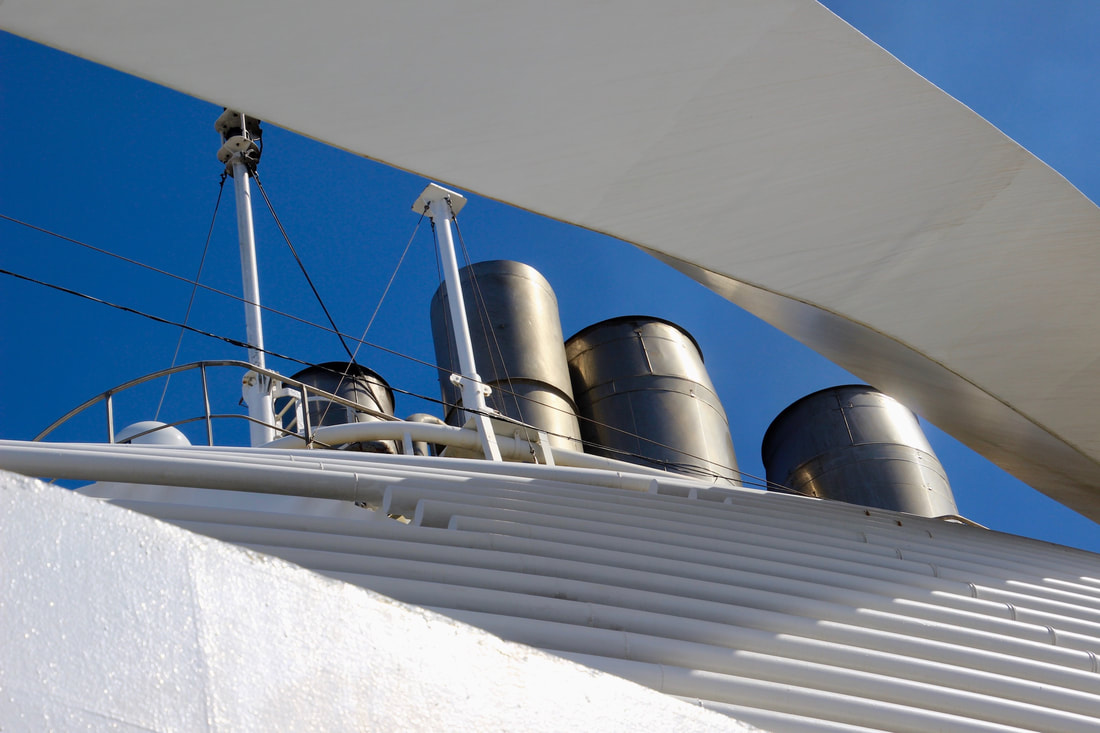 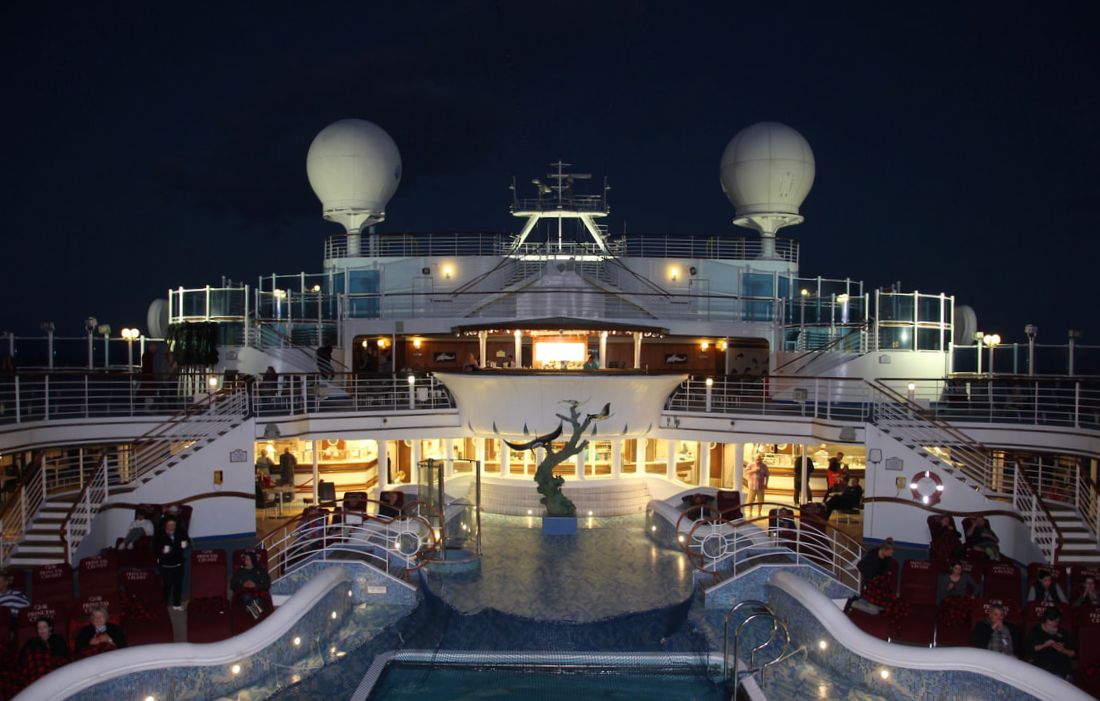 ABOVE - A NIGHT TIME SHOT OF THE BAR ON DECK 15. AS WELL AS DECK 14 WHERE BELOW WAS THE PIZZA AND THE BURGER AREA, AS WELL AS ANOTHER BAR DIRECTLY BELOW THE TOP BAR. 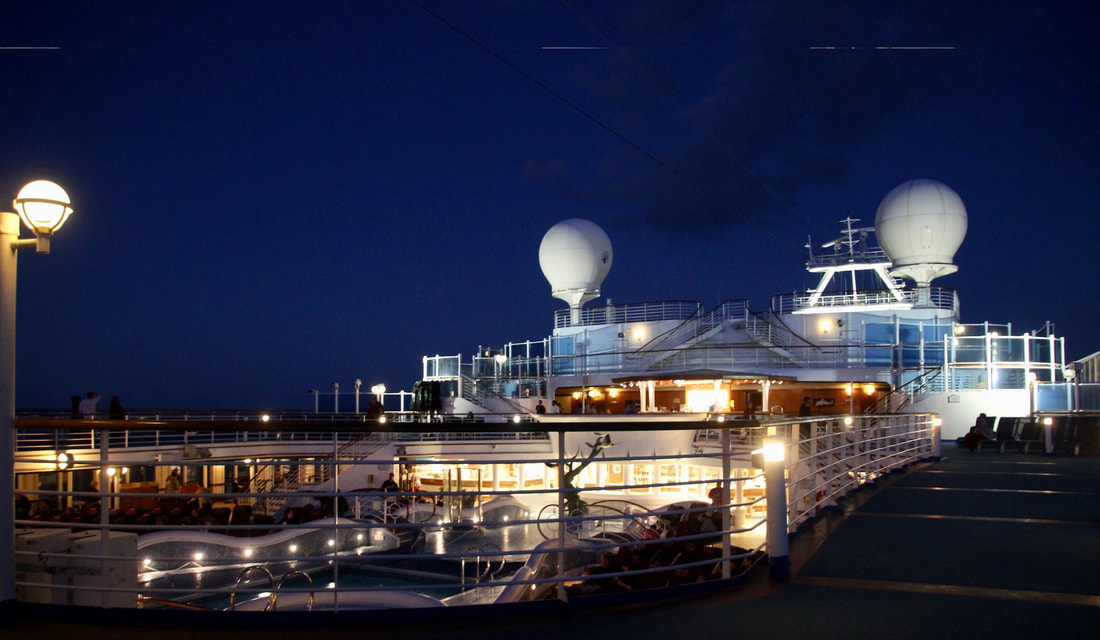 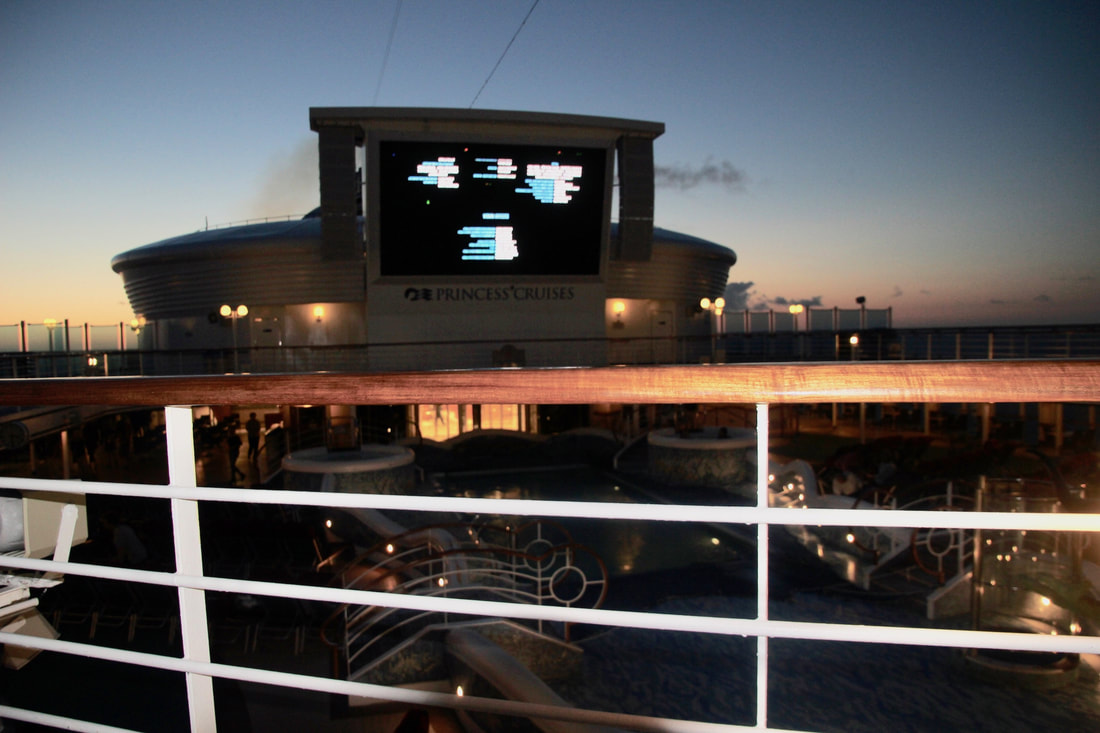 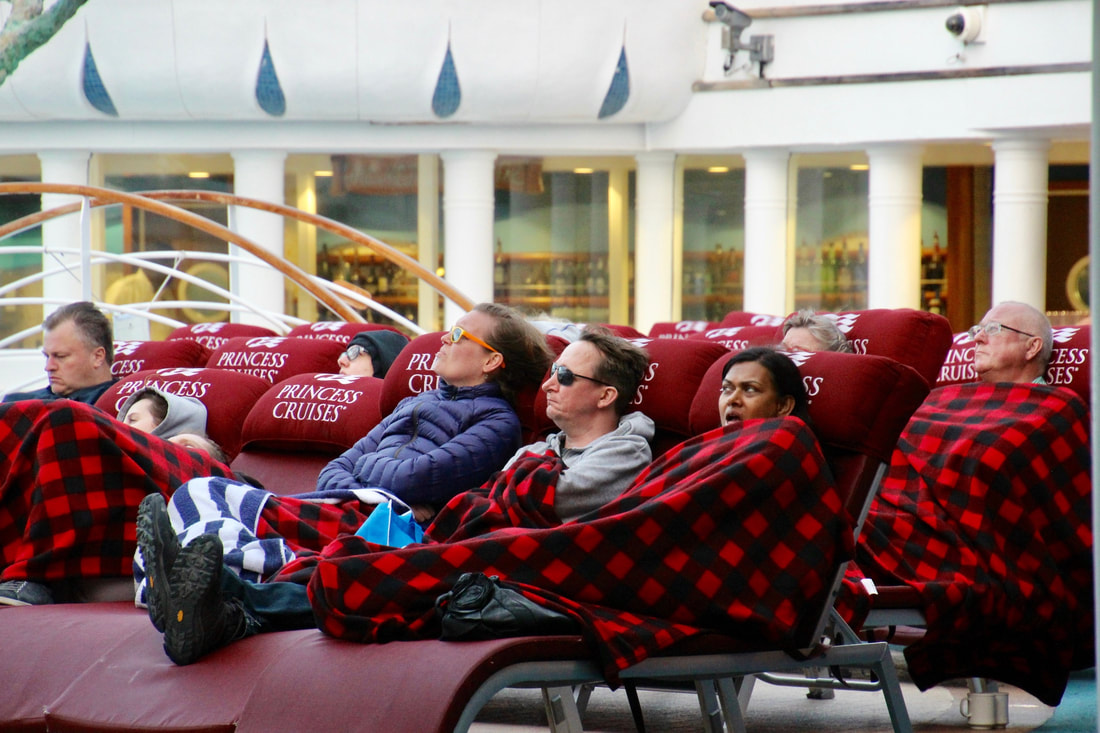 ABOVE - IT WAS COLD ND OFTEN WINDY IN THE EVENING WITH THE FIRST MOVIE SHOWING AT 7 PM. THESE PEOPLE HAVE BLANKETS AND ARE RUGGED UP WATCHING A MOVIE. 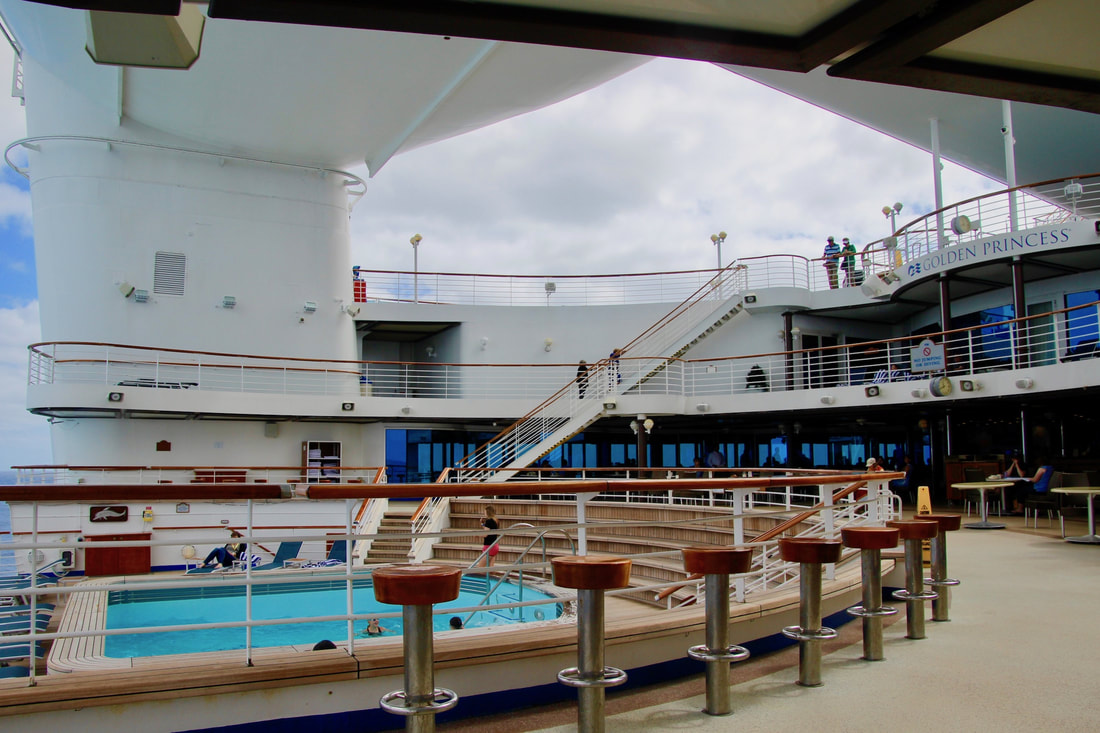 ABOVE AND BELOW - THE BACK OF THE SHIP. ON THE RIGHT IN THE PICTURE ABOVE IS A BAR WITH TABLES AND CHAIRS IN THAT AREA.

ABOVE - LOOKING AT THE OCEAN FROM THE BACK AREA. 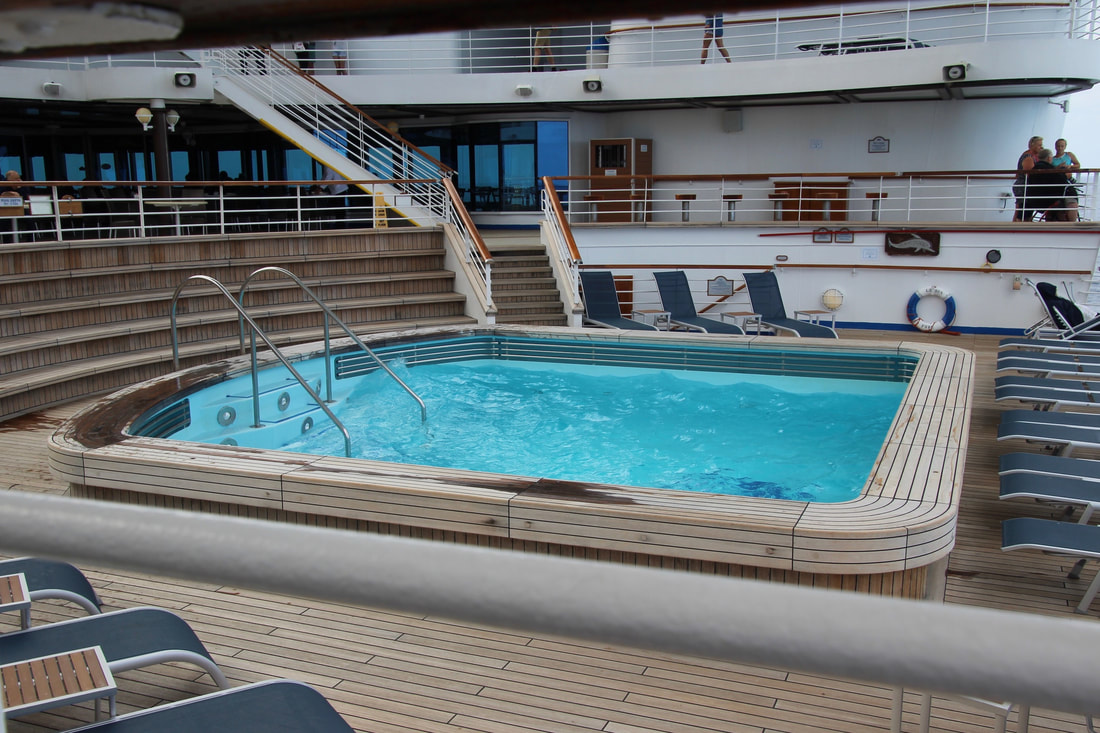 ABOVE - THIS POOL WASN'T USED OFTEN AS IT WAS USUALLY WINDY WHEN AT SEA, AND THAT MADE THE WATER IN THE POOL VERY CHOPPY. 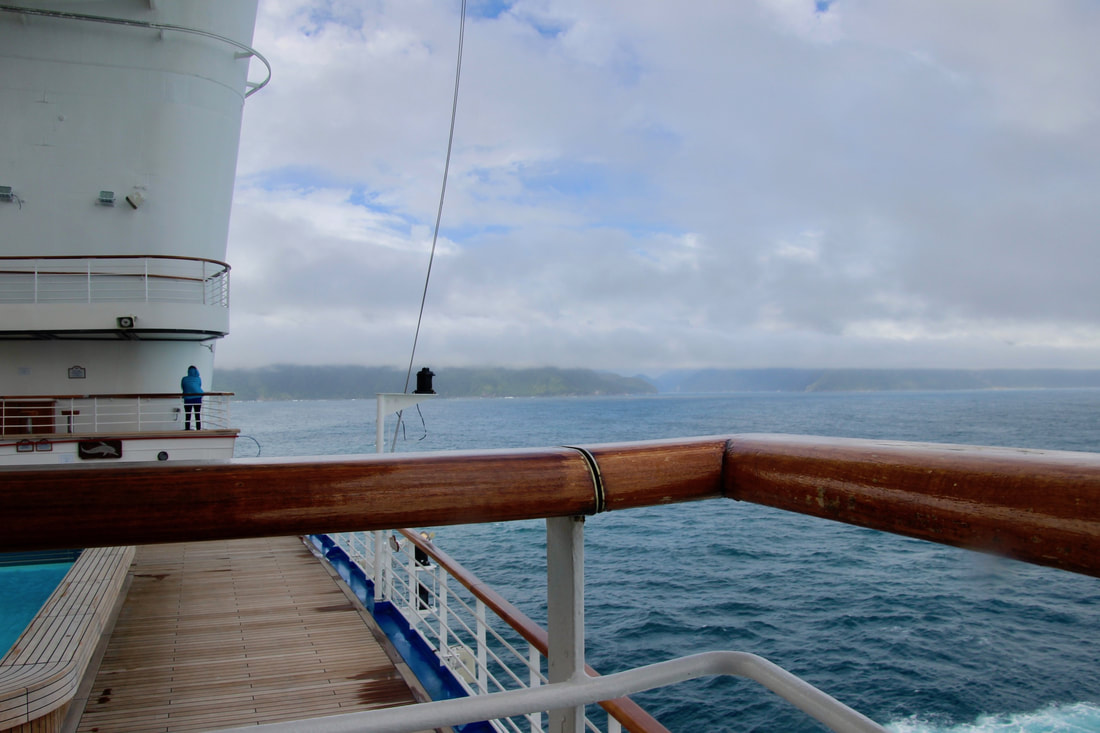 ABOVE - THE WALK WAY TO THE NIGHT CLUB. INSIDE IS A SEMI ACCESSIBLE AS IT HAS TWO DIFFERENT HEIGHTS OF SEATING. THE LOWER LEVEL IS SEMI ACCESSIBLE BUT ONLY A FEW TABLES AS IT'S VERY TIGHT. THE UPPER LEVEL IS NOT ACCESSIBLE WHICH HAS SEATS AND TABLES, AS WELL AS A DANCE FLOOR. 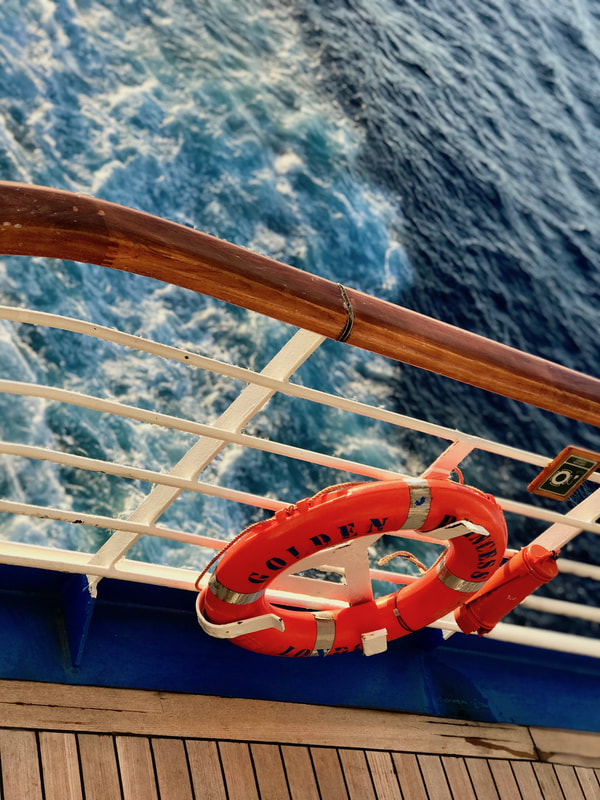