BELOW - THE CABIN. It was a great size and originally had twin single beds in it. There are wardrobes on the right hand side of the photo, with plenty of drawers everywhere for us to unpack our things into. The luggage limit was 32 kg per person, as you can imagine that's a lot of luggage, and I needed every gram of it as I had taken so much continence products.

I hired a special hospital bed, just like the one I use at home, as well as  hoist. The plan with the hoist was to use it for exercising as I transfer on and off the bed and shower chair myself. The room steward and co-workers just moved one of the chest of drawers around so that we could fit my bed in. The hoist went well under the desk area after we moved out a small table and a couple of chairs. The doona on the bed was divine as were the pillows and I believe the beds were very comfortable.

The bathroom had a ramp to get into it which was much easier to get up when I was in the electric wheelchair than the commode. It was a small bathroom with a basin that was far to large, and fold down shower seat that was tiny. I didn't use that so I was fine. There were so many hand tails everywhere, and the layout worked well with the shower. The only problem was that the shower chair didn't fit over the toilet, however that wasn't an issue to resolve. More information about the bathroom below.

We had a wonderful room steward by the name of Phan from Thailand who couldn't do enough for us. If we required anything extra at all, we just asked him or any other staff member. 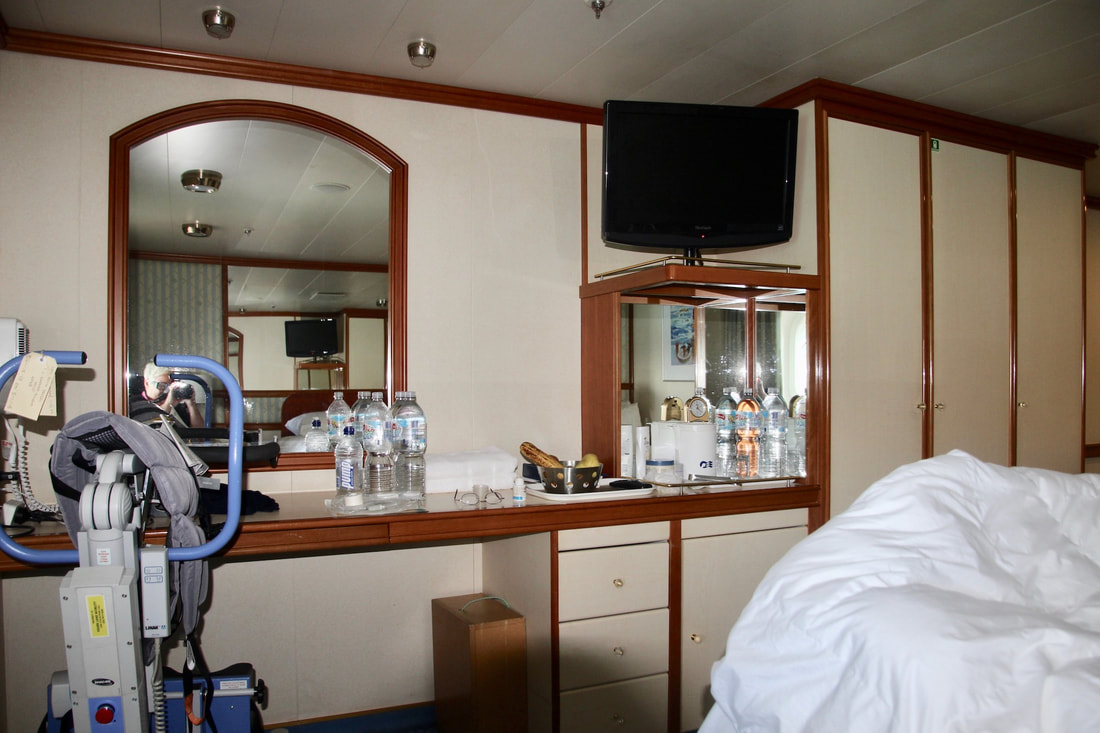 ABOVE - BOTTLES OF WATER...NOT ALCOHOL :) 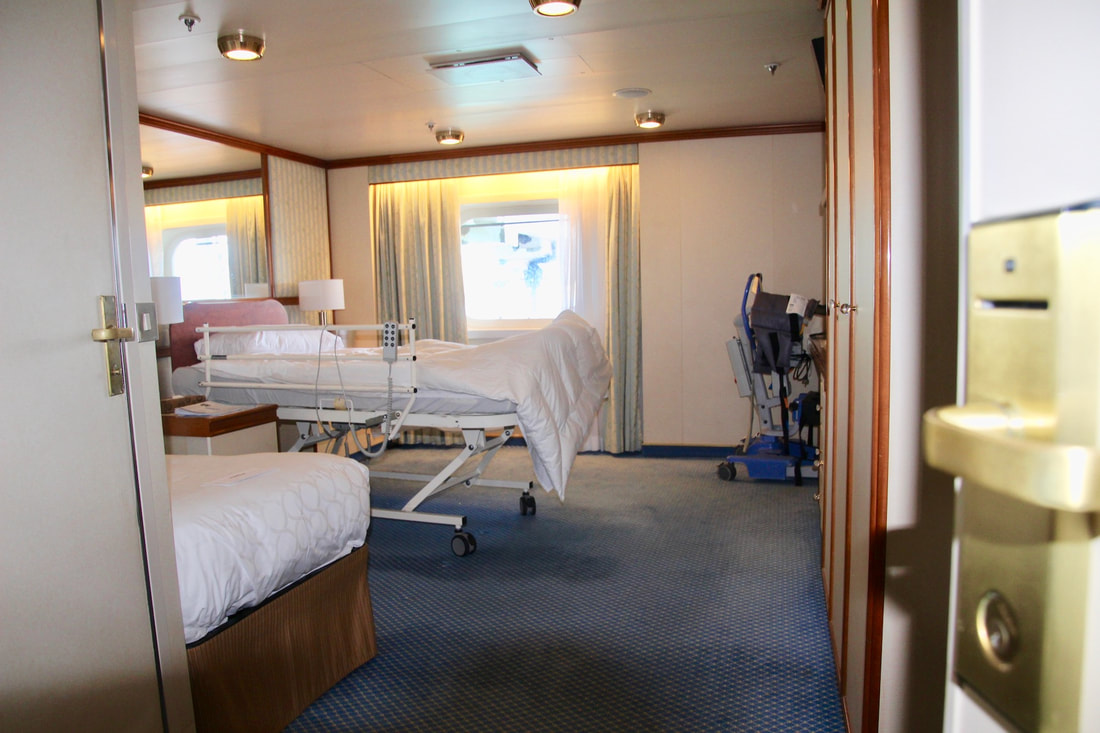 ABOVE - THE VIEW OF OUR CABIN AS YOU ENTERED IT. THE BATHROOM IS THROUGH THE DOOR ON THE LEFT.
BELOW - THE HANGERS ARE GREAT AS THEY ARE LOW ENOUGH SO THAT IF YOU ARE IN A WHEELCHAIR YOU CAN REACH TEM. AS WELL AS HIGHER ONES.
​BELOW - THE BATHROOM 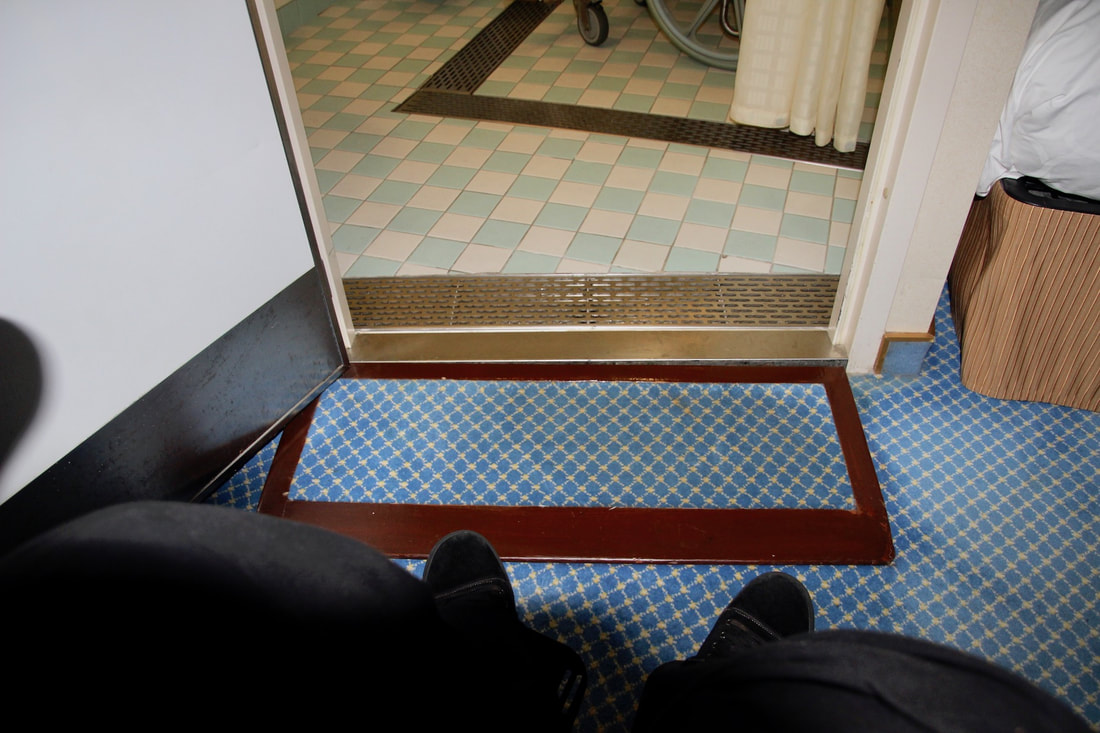 ABOVE - THERE IS A RAMP INTO AND OUT OF THE BATHROOM.
BELOW - THE BATHROOM WAS SMALL HOWEVER WORKABLE. The shower hose moved up and down which was great as after my roomie had her shower, she would just move it down to suite my height. There were plenty of hand rails everywhere as can be seen. I took my own shower chair (bottom right) which took up a bit of space however I just needed to be careful when turning around when in there with my wheelchair. The only negative was that the basin was deep which meant I had to really lean over when brushing my teeth as I couldn't get my legs below it. The shower chair didn't fit in next to the toilet as there was a toilet roll holder right next to it, so we improvised. The photo that is below the bottom right hand one with the railing and arm rest of the commode, just below the hand rail is the seat that folds down. That is to small and would be big enough for about a 5 year old child. Otherwise we improvised and managed and it worked out brilliantly. 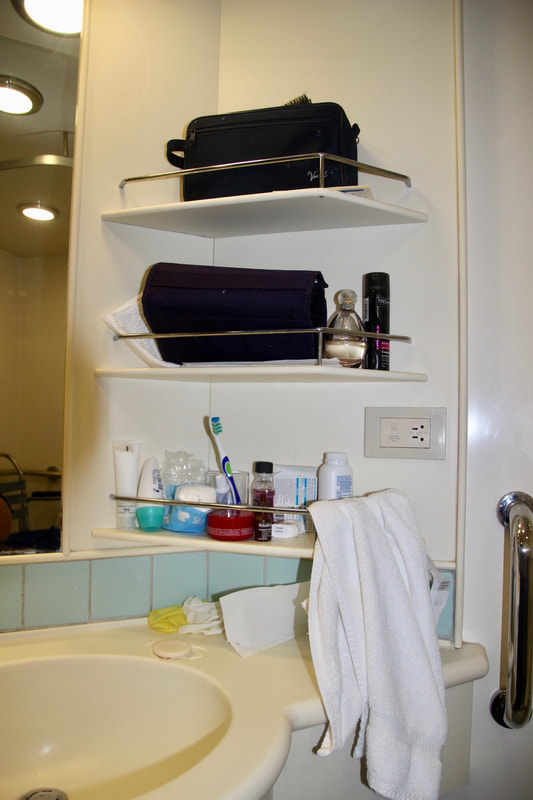 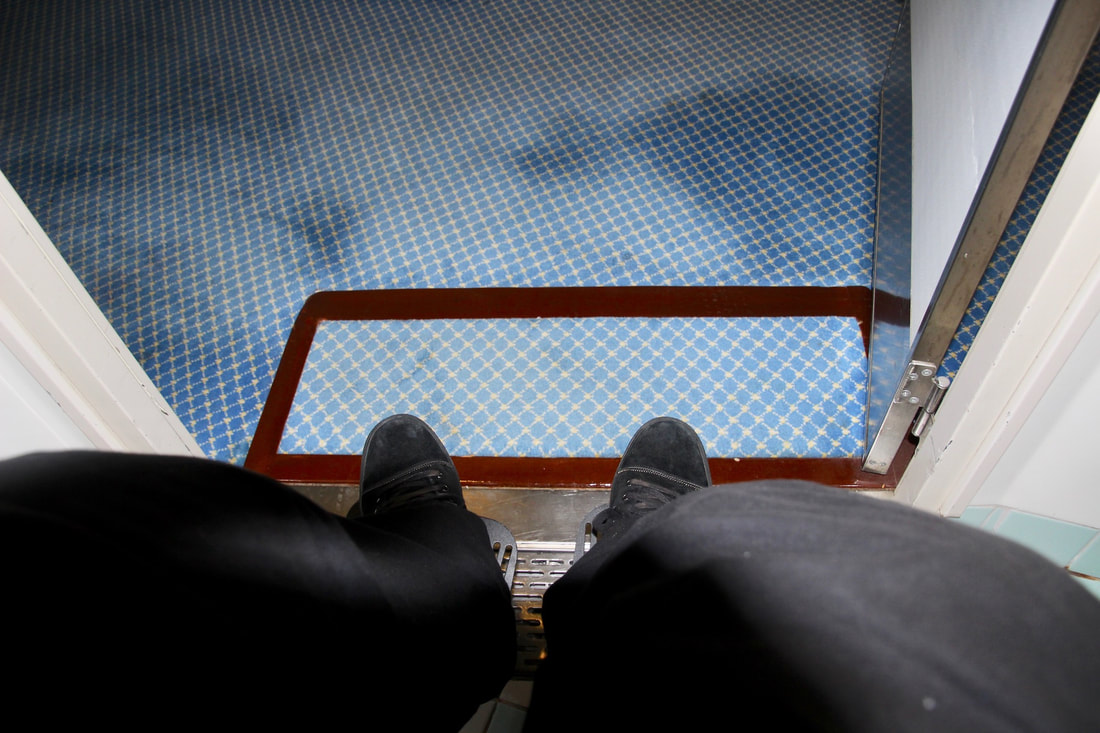 ABOVE - ME COMING OUT OF THE BATHROOM DOWN THE RAMP. 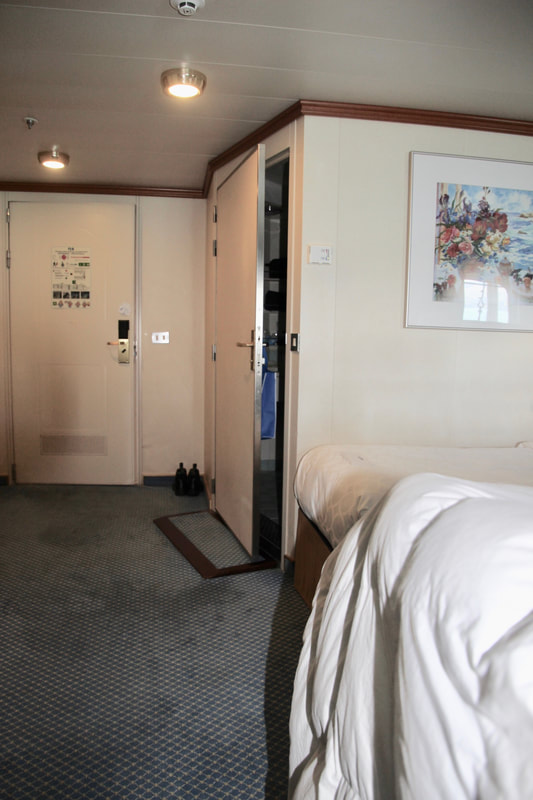 ABOVE - THE VIEW LOOKING TOWARDS TO BATHROOM DOOR AND THE CABIN DOOR.
BELOW - MUM'S CABIN - A STANDARD STATEROOM CABIN 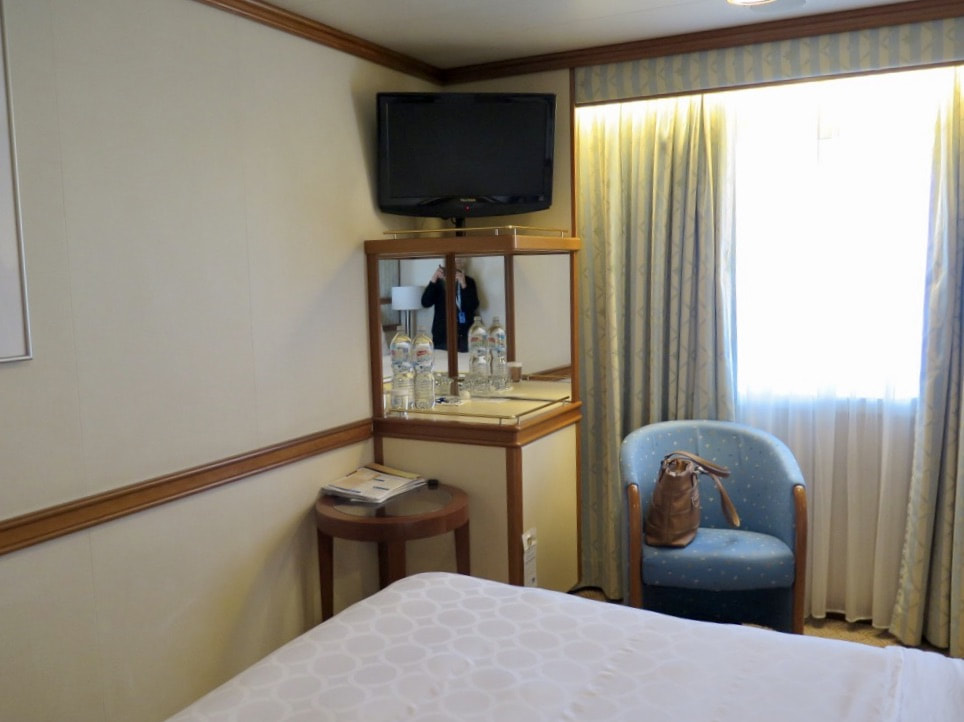 BELOW - MUM TAKING PHOTOS OF THE SIZE OW WARDROBE SHE HAD, AND HERSELF AS WELL. THERE WAS SO MUCH WARDROBE SPACE IN HER WALK IN AREA, THAT WERE STORED OUR BIG SUITCASES THERE.